← back to
Seeing Red Records
Get fresh music recommendations delivered to your inbox every Friday.

Body Void - You Will Know the Fear You Forced Upon Us 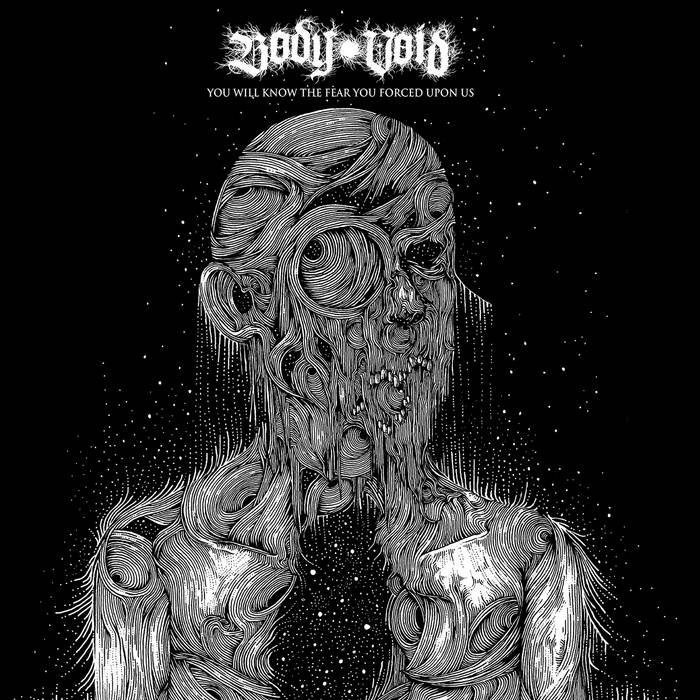 Tim McLelland This reminds me quite a bit of Chained To The Bottom of The Ocean ... a great band. Excellent stuff ... harsh, plodding, and HEAVY as fuck. Favorite track: Die Off.

"The new record veers in a much crustier direction than the band’s previous releases, with more frantic tempos and even moments of d-beat blasting through the chaos. This is the heaviest entity from Body Void thus far, and to be honest, I wouldn’t be sad if this signalled more filthy things to come in the future."
- Metal Sucks
www.metalsucks.net/2019/03/15/shit-that-comes-out-today-march-14th-2019/

"Ryan's piercing shriek and the glacial pace are consistent hallmarks of the trio's sound. It's the subtle nuances in these two tracks. In the waning moments of "Die Off," Body Void breaks out into a crusty d-beat rhythm for a few (relatively) brief moments. Ryan's vocals retreat into the background as the groove rises and rolls over to the beginning of "Fascist Cancer." If you look at both songs as a collective, the EP seems to mirror itself—its inflection point being the transition between the two songs. The band uses the shift in tempo to turn the EP on itself in roughly a five or six-minute span."
- Metal Injection
metalinjection.net/av/full-album-stream/body-you-will-know-the-fear-you-forced-upon-us-premiere

" “You Will Know the Fear You Forced Upon Us” is a damaged and furious burst that refuses to lie down and accept the pain and instead vows to make those who create fear have an even larger helping of it for themselves. Body Void are a band that has their hands reached out to others as we fight back against fascism and oppressive viewpoints that deserve to die."
- Meat Mead Metal
meatmeadmetal.wordpress.com/2019/03/06/body-void-smear-sludge-doom-into-an-assault-on-hatred-with-heavy-you-will-know-the-fear/

"Overall, the music sounds crustier and less drone-heavy than before, and yet some of the slow motion riffs stayed to give the listener a familiar agonizing feeling of all-nullifying sound. Like on their last album, Body Void use feedback tastefully to add a few, sparse moments of release to their nearly endless minutes of building tension."
- Everything is Noise
everythingisnoise.net/news/body-void-to-release-new-ep-share-stream/

"Body Void records aren’t for everyone, and even those of us who love this band’s music kinda need to be in the right frame of mind to truly get into it. It’s worth finding that mood. The rewards are terrific."
- This Decay
www.thisdecay.com/review-body-void-you-will-know-the-fear-you-forced-upon-us/

"Body Void is by no means for the faint of heart or those desiring measurable vocal melodies. Amidst the swirls and screams, there is a band pushing towards the future. The stomping is infectious."
- Glacially Musical
glaciallymusical.blogspot.com/2019/03/ep-review-you-will-know-fear-you-forced.html?m=1

"This latest release only cements how effective and enjoyable Body Void are. This is an essential listen for anyone that’s a fan of this sort of extreme doom."
- Wonderbox Metal
wonderboxmetal.com/2019/03/14/body-void-you-will-know-the-fear-you-forced-upon-us-review/

Recorded and Mixed by Greg Wilkenson at Earhammer Studios in Oakland, CA, September 2018
Mastered by Brad Boatright at Audiosiege in Portland, OR
Artwork by Muhamad Ikabal Arifin Suradi